Let’s start by introducing yourself. Who are you, and what do you do?

How long have you been doing graffiti?

I’m almost ashamed to admit this… I started painting graffiti in 1996 after years of an unhealthy love of all sorts of vandalism.

What were your influences to start doing graffiti?

Now that I think about it, there are so many small things that pushed me towards graffiti. Skateboarding, teenaged assholeism and growing up on a busy rail line seem to be the most important influences. 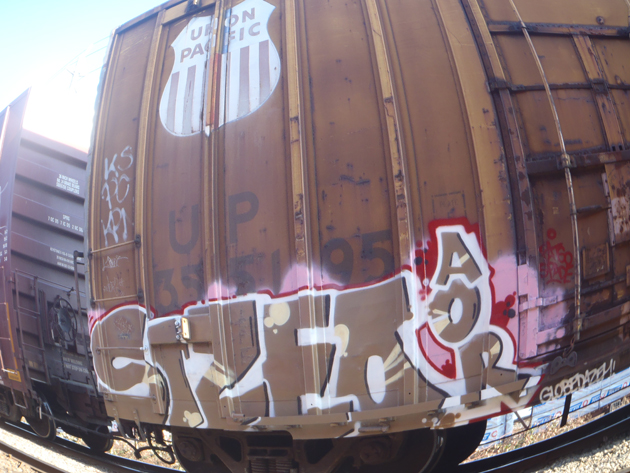 Have you done any traveling with you graffiti?

It’s not where you are from; it’s where you’re at! But traveling is soooo important as a graffiti writer, and person, to travel to see other cities, get cars rolling in other pools. I’ve done a bit of traveling, up and down the Eastern seaboard in the U.S…Boston,Ny,Philly,Nj…all over Up State Ny…been to the west coast a few times too Seattle, Vancouver.

What’s your favourite city to paint?

Depending on what you want to paint I guess, BUT I could give a fuck, wherever I’m at it’s fine by me I’ll get over on something!

How would you describe the graffiti scene in Toronto? How does it differ from other cities?

I’ve got to be the worst person to ask that!!!!! As an outsider to the Toronto scene I get to see the good and bad of our city. Graffiti is alive and very well here, even with the newly elected slob’s eradication plan, we have style masters pushing boundaries, on walls and freights, transit gets done, the streets get some serious love. Comparing Toronto to other cities is little shitty; like I said it’s not where you’re from its where you’re at! Take pride in your city but take more pride in your fucking craft, do your city a favor and put it on no matter where you are, that’s the best thing you can do, talking shit and wearing team logos only gets you so far.

You’ve started your own ink company “Block by Block”, what made you decide to start making ink?

YES!!! Block by Block was idea long in the making! I’ve always focused on hand stlyes and the tools to create them. After years of fucking with ink recipes. I knew it was time to bring fourth a Canadian product that was inexpensive.

How long has the company been around?

The product was officially released in the spring of 2011 after two and half years of solid research into manufactures. The name itself has been around for almost five years.

What makes the Block by Block ink different from other inks?

Besides being Canadian, Block is different because it’s formulation is that of traditional ink. It’s not a thinned out paint product yet it is still solvent based giving it that staining power and ability to withstand the harsh elements our climate can bring!

What can costumers expect from Block by Block ink?

Expect a quality product at a reasonable price! Expect drips to the ground and pens worth your hard earned money!

Where can our readers find your products?

Were currently for sale in Montreal at La Rock, Toronto at Joe Huffers, Vancouver at Mainline Galleries and on our website…..or see me walking blocks!

What can we expect to see from Block by Block in the future?

Expect more colours and shops to be carrying our product. Silver and white are about to drop….red and purple are ready for release. Limited runs of shirts by writers and designers that we respect for there hustle!

Huge shouts to all of our supporters, with out you walking blocks we wouldn’t be doing this! To Sense Lost for their time and effort. UNDER PRESSURE for the years of love and support not only to me but also to the graffiti community at large! Dazem for the web and IT help. Serious, Bien, Adore and Robot, Ef, Grams, Aper, Joe Huffers…all the GH,LSD,AOR,STS boys and to anyone that’s helped out……I thank you. SUPPORT LOCAL BUSINESSES!!!